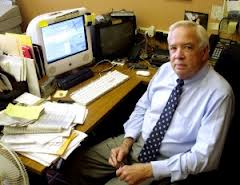 To learn that Paul Davis had passed away certainly caused sadness to many who love journalism and appreciate its rich history in Alabama.  Those of us who knew him were bummed too.

The basics: Paul died Monday after a brief illness. He had been in declining health for some time.  The sad news of Monday brings to an end a newspaper career that will not be replicated – not because of the changing nature of the industry, but because Paul represented a generation of journalists whose fire and advocacy seems a lost flame today.

There are those who knew Paul better than me, and the Alabama Press Association’s obituary has great detail on his career.  But I will do my best to remember the man as I knew him.  Maybe others can fill in the blanks in the comments section.  Here is what I admire most about Paul:

1. At the age of 25, he was there when Gov. Wallace stood in the door of Foster Auditorium, refusing to allow African-American students to enroll at the University of Alabama.  When Deputy Attorney General Nicholas Katzenbach arrived with the Alabama National Guard, he met privately with Wallace.  Only one journalist would be allowed to report on the meeting, and Paul’s name was drawn.  He even came away with a photo of him with Katzenbach and Wallace.  Not surprisingly, I could not find the photo on the Internet.  (Getting it scanned is definitely on my to-do list.)  But I use him as an example to my students of someone who was not intimidated by the weight of a historic moment.

2. Paul’s crusade in the late 1960s uncovering mistreatment of mentally handicapped kids and mentally ill adults at state hospitals represents the best of journalism – advocating for those unable to speak for themselves.  His work in the Tuscaloosa News was nominated for the Pulitzer Prize, and though his work was not selected, the rewards of having federal courts intervene on behalf of the patients was far greater.  Eventually, he would be appointed to the state Department of Mental Health Board of Directors.

3. I met Paul in 1977.  He had purchased the Auburn Bulletin from the Neil Davis family, and the Bulletin had been awarded the printing contact for The Auburn Plainsman.  We certainly made life miserable for Paul’s production crew, which included his son Allen, who is now an executive with Media General.  Well, maybe our damage was limited to Wednesday nights. The old print shop is now Bloodhound’s.  I visited the building for the first time in 2003, when it was the Auburn Ale House.  Heavy deja vu walking up and down those stairs.  Thank goodness the ink smell was gone.

4. From then on, these past nine years, Paul enjoyed his “lion in winter” phase.  He continued to publish the Tuskegee News.  After Tallassee News Publisher Jack Venable passed away, his family accepted Paul’s bid to purchase the newspaper, wishing it to be sold to someone who believed in community journalism.  His columns continued, and while his conclusions might have irked many, his reporting was spot-on.

Appropriately, Paul was a frequent visitor to our Friday morning breakfast group. It had started as a book discussion group by Neil Davis at The Grille.  Before I started attending, apparently a roof tile fell on Paul one morning, sparking conspiracy theories. As his health began to fail, his visits became less frequent, but he was always on our minds, and in our prayers when word came that he was not doing well.

A few weeks ago, I was at Golden Corral with a friend.  Paul and his wife, Gayle, were there with one of his sons, and he insisted that we join them.  He seemed tired – the edge of his wit did not have me backpedaling, as it usually did – but he was enjoying the meal.  I did not know it would be the last time I would interact with Paul.  Now, I feel blessed that it was granted me.

I’m glad to be a faculty member of the journalism program at Auburn.  Maybe we have the next Paul Davis among our current or future students, or maybe even among our alumni.  But for now, I’m grateful for the work and the example of the original.

These days, Southern football and evangelical Christianity have forged a strong bond.  But it hasn’t always been that way.

At least, so wrote Andrew Doyle of Winthrop University, in an article he wrote titled, “Foolish and Useless Sport: The Southern Evangelical Crusade Against Intercollegiate Football.”

In fact, the article was published about 15 years ago, in the Fall 1997 issue of theJournal of Sport History.  I came across it while doing some other research, and the topic naturally interested me (as did the mentions of Auburn University).  But keep in mind that basically all of this stuff is his.

The Auburn-Georgia game in February 1892 is considered the first intercollegiate football game in the Deep South.  But the arrival of football did not impress the local clergy.

The Rev. C.L. Chilton, pastor of the First Methodist Church in Auburn, declared that this “foolish and useless sport [was] more properly called a fight.”  He gave an injury report for both teams, but the sprains and broken bones listed were a denunciation of the spectacle.

Chilton, like many church leaders, was concerned that football would overwhelm the academic mission of the Alabama Agricultural and Mechanical College, as it was known as the time.  “Here in Auburn, football is the one engrossing theme during the season.  The whole thing is a travesty upon higher education,” he complained.  Even the daily practices were popular: “Learned professors hasten to the scene of the fray,” he said.

Some might argue that football provided exercise to build strong young men, but Chilton was unimpressed: “Any young man can acquire that at home in the useful emoluments of cutting his mother’s yard or driving his father’s plow.”

The Wesleyan Christian Advocate in Georgia joined the criticism that immediately followed the game: “And so the sacred altars, whose incense has been so inspiring to our people in the past, are broken down, and these gods of the sensual and material man have set up their altars instead.”  To the WCA, the game represented “a swing back to Olympic Greece and her barbarian ideals.”

So how could such an outrage happen?  The WCA blamed it on the South’s defeat in the Civil War.  Social degeneration allowed football to find its way onto Southern campuses.  “This new outbreak in the South, in contrast with the sturdy integrity of our past history, is but a natural result of lowering the standard of citizenship and manhood.”

To others, it was another cultural evil brought down from the North whose effects would be felt deeply on the college campuses.  W.P. Fleming, a teacher and Methodist church member writing in the WCA, urged Southerners to resist “the athletic craze [that] is just beginning to take southern colleges … before our higher education will be degraded into what it has already become in some institutions of the North.”

Alabama and Auburn played for the first time the year after Auburn and Georgia.  By 1900, the pastor of the First Baptist Church of Montgomery said the behavior of fans who attended that years game in the state capitol “is such as to startle and shock the community.”  Indeed, the Alabama Christian Advocate described football’s ability to “convert a crowd of students, inflamed with liquor and excited by loyalty to their institution, into a howling mob of toughs, gamblers, and drunkards.”

Even after Auburn stopped playing Alabama, the Tigers continued to travel to Birmingham to play games.  Seeing the students flock to the city’s saloons, the president of the state Women’s Christian Temperance Union asked the Auburn president to stop scheduling games in Birmingham.  Unfortunately for the WCTU, the bigger cities provided bigger ticket sales, so the request was ignored.

As part of the greater debate on the usefulness of sports like football, many pointed to its role in building strong young men imbued with a commitment to teamwork and sacrifice toward a common goal.

But these Southern writers were not buying the “manhood” argument.  The WCA exhorted the universities to “hold the standard of scholarship high, so as to require true manhood to reach after it, and when it is attained, we could feel that we have real men as our sons and not mere prize fighters.”

It’s amazing to think that because of the pressure, the University of Georgia trustees banned football shortly after the first Auburn-Georgia game, though they caved to pressure from students and the media a year later.  The University of Alabama restricted the Alabama team to home games.  That restricted football so much that Alabama played only four games overall in 1896 and 1897, and did not field a team at all in 1898.

Eventually, of course, all of this changed.  The evangelical church has come around, and institutionally speaking is one of football’s biggest supporters.  And the University of Alabama even allows its team to play away games (though getting them to the Auburn campus would take a few more decades).