First published by College and Magnolia (SB Nation). You can link to it here.

As Auburn students begin another school year, and Auburn fans look ahead to football season, the sad reality of Philip Lutzenkirchen’s untimely death will hit home even more. His death was a jolt to the Auburn community, even as it happened over the summer, with many of our students gone.  Social media connected the Auburn family in its mutual grief, while also demonstrating just what Philip meant to the campus and the greater community. For many Auburn students, the first experience with peer loss is a jolt — a dose of the reality that youthful invincibility is ultimately an illusion.

For us faculty and staff — many of whom already are guaranteed decades more than these lives lost too soon — it is a jolt as well, a reminder of an uncomfortable truth: Young people, current and recent students, die.

The odds turn on them with cruel randomness, and they die in car wrecks or as crime victims.

Their struggle with terminal illness lacks the ultimate triumph.

An undiagnosed condition steals in and steals life.

The substance abuse they thought they could control proves otherwise.

And some mistakenly decide that ending their own lives is preferable to living with the pain.

As faculty and staff members find ourselves within a grieving community, it is our responsibility to help the students grapple, even as we struggle in our own way.  It doesn’t get easier with practice.

In 1997, while I was at Campbell University, a freshman wrestler, Billy Saylor, 19, died while trying to cut weight for a tournament.  He was one of three wrestlers who would die that way within a month.  It led to stricter weight-cutting guidelines from the NCAA.

As word of his death spread across campus that Friday (it had happened late the previous evening), life also seemed to stop at the small campus.  It was a day of talking to students, worrying about the teammate who was there when Billy died, facing the Raleigh, N.C., media barrage.

As I watched the 6 o’clock news, it struck me.  The worst thing that happened was that Billy’s dreams had died with him.  Becoming a champion wrestler, marrying his high school girlfriend, whatever career he was aiming for — the dreams were gone too.

I remember verbalizing a question to myself: Why did God give me and not Billy Saylor November 7, 1997 (and about 6,000 more days after that)?  It seemed unfair.

The answer that came back — we could debate the source — was that I could find the answer to that question in each day that followed.  That also became my vow, and it has continued through my 11 years on the faculty at Auburn.

But more than that, the experience changed how I looked at my students.  No longer were they 85 percent fun, 15 percent why-don’t-you-listen-to-what-I’m-trying-to teach you (with the 15 percent dominating).

Instead, they became conveyors of something precious — their dreams and goals.  My vocation, besides getting them to look up spellings and AP style rules and gather and structure information, was to bring them closer to those dreams, by whatever means. Even a change to a new major, if necessary.

Over the past 17 years, I’ve tried to keep that thought before me.  Yes, sometimes students make it difficult, when they don’t seem to have many dreams beyond the next Wednesday night Toomers Corner pub crawl.  Sometimes they have to be reminded that unlike animals who eat, sleep, breed, and annoy other animals, they have the capacity to aspire to make their lives better and to simply be better.

I also know that each student is a treasure to someone, even one parent or a sibling or an aunt/uncle.  And that treasure is committed to Auburn University — with fear and trust, but mostly fear — for the next 4-plus years.  Our job is to return that treasure with something valuable, increased knowledge, so that society can benefit as well.

In spring of 2007, after the horrific shootings at Virginia Tech, I attended an on-campus vigil Auburn students conducted in front of Samford Hall.  I saw one of my students, Megan, there.  I wondered how her parents felt after realizing that twenty-seven families had lost the students they had sent to Virginia Tech.

After the vigil, I put my arm around Megan and said, “For all that we (faculty) give you guys a hard time, it would devastate me if anything like this happened to you.”

In the seven years since, students have died.  A suicide in February brought two of his fellow students to my office with questions of whether they could have done more.  We couldn’t know.  All we knew was that his pain overrode everything else in his life, including his dreams for his life and his parents who considered him their treasure.

And when a 23-year-old recent Auburn football player dies in a wreck on a rural Georgia road, it brings it home again.  Why did God give me and not Philip Lutzenkirchen July 30, 2014, and the days that followed?

As I said, I don’t know the answer to that question, but I do know that I will find it in each day that follows.  And I know that a big part of that answer involves my students, and their dreams. 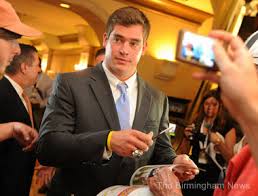