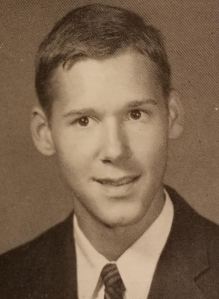 On May 9, 1962, sophomore Jim Dinsmore penned a column, “Cluttered Heart Cries for Expression on Issues,” in The Auburn Plainsman. The column wandered over a variety of topics. One paragraph would ignite a firestorm.

That was it. A single paragraph on integration that turned out to be accurate in its forecast.

When the article came out, the AP quoted President Ralph Draughon as saying Dinsmore “has no limits on extremism. He doesn’t represent the thinking of the institution.” Dean of Students James Foy described Dinsmore as “highly intellectual, and highly confused.”

The Publications Board (predecessor to today’s Board of Student Communications), met on Friday, May 17, to discuss how to respond to the column. The chair, Foy, was also concerned with the sentence that followed the integration paragraph: “On the state of Alabama: At the present time it can only be characterized as a haven of general ignorance, prejudice, and narrowmindedness.”

Paired with the fear-inducing mention of integration, it had the Publications Board running scared — of the Board of Trustees, and even the Alabama Legislature.

Professor Paul Burnett, who taught journalism classes within the English Department, “reminded the Board that the Trustees considered last spring the discontinuance of the newspaper” (after a pro-integration column by editor Jim Bullington), according to meeting minutes.

Burnett was afraid that the Trustees would suspend Plainsman publication for the next academic year if the Board did not take action.

He was not overstating the hazard. The year before, after Bullington’s pro-integration column, the board had stipulated that before any article “having a bearing on the good name of Auburn University” was published, the editor would advise Dean Foy.

Draughon took the board’s action to mean that Foy could direct The Plainsman editor not to run such an article, and the editor would have to comply. In other words, the board and Draughon said Foy was empowered to censor The Plainsman.

Draughon told Foy to inform Bullington that if he failed to follow this directive, he would be removed from office as editor. (Bullington never submitted an article to Foy for review and would step down as editor shortly before the end of spring quarter 1962 and before the board could remove him.)

In addition, Draughon warned, “If further instances should occur, The Plainsman would have to be discontinued,” Foy wrote to Bullington in a letter that is included in the archives with the Publications Board minutes. So Burnett’s fears were strongly founded.

(In the letter Foy, trying to begin with a conciliatory tone, informed Bullington that his ODK shield signifying his membership in the honorary would be arriving soon. Then he dropped the presidential beatdown.)

The Board voted to reprimand Dinsmore for writing the article and Bullington for allowing its publication. They did not suspend Dinsmore from the newspaper staff, however, because they didn’t have to.

During the debate, incoming Plainsman editor Charles McCay “stated that he hoped he would not have to bring this up, but first of all Jim Dinsmore and he thought that it would be to the best interest of everyone concerned if he would not write for The Plainsman next year,” the minutes noted.

At its meeting the week before, the day the Dinsmore article came out, the Publications Board had noted that no qualified editor candidates had stepped forward to edit the summer edition. Two candidates had applied, but the board considered them unqualified, whether by lack of experience or lack of coursework.

So the board voted not to publish The Plainsman for summer quarter 1962. No provision was made to wait and seek a more qualified candidate.

Did the Dinsmore column firestorm cause the Board to seek a cooling down, Plainsman-free summer quarter, with the candidate situation providing a convenient excuse? The minutes don’t say; still, this is the only time that happened. The Plainsman has produced a smaller issue, in print or later online, every summer since.

This drama had its epilogue in spring quarter 1963. Dinsmore tried to run for editor, but his application was disqualified because it had arrived a day late.

In a letter to the editor that ran in the March 27, 1963 edition (whether by Foy’s permission or not is uncertain), Dinsmore explained that he had spent spring break at home for minor surgery. His mother had mailed the application before the deadline, but it had arrived after.

Dinsmore acknowledged his procrastination in the letter (an eternal theme with college students). But he noted that late applications had been accepted in the past and he argued that he had “submitted” the application before the deadline, as stated in Publications Board policies.

His mistake, of course, was giving the Publications Board a quick and easy excuse to reject his application without having to address the column of the year before.

Dinsmore would go on to make one more statement about integration. At the beginning of winter quarter 1964, the day Harold Franklin was allowed to register, students were warned to leave him alone as he walked from his dorm room to the library.

But two members of The Auburn Plainsman staff approached him as he left the library and welcomed him to Auburn. They were detained and questioned by police and released. One was Bobby Boettcher, yet another pro-integration columnist.

The other was Jim Dinsmore.

The announcement of a new structure for Auburn’s student media has created an outcry, particularly among staff and readers, current and former, of The Auburn Plainsman student newspaper.

Rather than talk this through 140 characters at a time, I’ll address the situation through my blog.  It’s not sports, but as a former Plainsman editor (1977-78), it’s close to my heart.

Two broad points to make: 1) The new plan is not a disastrous structure for The Plainsman or any student medium. 2) The Division of Student Affairs should have been more open and inclusive in the process that arrived at this new structure.

First point.  Auburn student media should be merged under one umbrella.  It has been talked about for years, even before an external review recommended it in 2010.

Universities across the country organized student media this way.  It recognizes the media’s move toward multi-platform reporting, it unifies advertising sales strategies, it eliminates redundancy of role, and it has the potential to save equipment money and better utilize office space.

That all student media would be under Student Affairs authority is again, neither unique nor dangerous.  Student media operate under a variety of administrative situations: student affairs, journalism academic units and (probably the worst) a university’s public relations office.  Some are totally independent and operate off-campus.

My one strong recommendation for Auburn’s structure, however, is that the four advisers to be hired (editorial, broadcast, technical and sales) not all report to the Office of Communication and Marketing within the Division of Student Affairs.  That creates an inefficient horizontal organizational structure and concentrates authority in the wrong position.

I strongly recommend that one of the four advisers be designated the director of student media, with day-to-day authority over his/her specific area, and be placed directly under the vice president for student affairs, Dr. Bobby Woodard.

Nothing against anyone who works under Dr. Woodard, but Student Media needs its own strong voice and it needs to be someone who works on the Student Center first floor, with student media.  That would give all student media the leadership and protection it needs and deserves.

Now, on to point 2.  The way this restructure was devised and planned was as bad as everyone is saying it is.  That Student Affairs devised it with no input from the students involved created the majority of the problems you see here.

Woodard claimed that the students were excluded because it involved private personnel decisions.  But students have served on personnel search committees in the past, and have observed the confidentiality of the situation.  I believe that Student Affairs, ironically, sold students short in this process.

But why not take it further? Why not openly discuss and devise this new structure?  Why all the secrecy anyway?  It always mystifies me that universities, with all of their theories of academic freedom and open discussion, revert to secrecy in practice, whenever an important decision looms.

I realize that personnel changes would occur, and that individuals could face drastic job changes.  These people are my friends too, and I respect what they bring to their work.  But as we’ve seen, the pain created was only made worse by the process used.

I honestly feel that the Division of Student Affairs leadership, including Dr. Woodard, owes the students an apology because of the mess that their approach created.  They can pledge more openness in the future, but whether they follow through on that pledge remains to be seen.

If the Division of Student Affairs claims to have such faith in the quality of students at Auburn, and such a commitment to their growth, maybe they should demonstrate it by including them in such important decisions.  It is counter-intuitive that they chose not to, in this case.

In closing, I recognize that Auburn student media will survive this, and with wise personnel decisions for the four advisers (including student participation in the search process), I think that all of the projects — The Plainsman, the Glom, Eagle Eye, WEGL and the Circle — will turn out the better for it.  And some loyalty toward the people who have served these projects faithfully is definitely appropriate and honorable.

As a result, all of the students who participate, whether School of Communication and Journalism majors or not, will have an experience that will help them, whatever profession they enter.

But for goodness sake, Student Affairs: If you’re going to continue to oversee any kind of media project, do it in a way that respects the openness that the First Amendment protects, and under which our students will learn and work best.