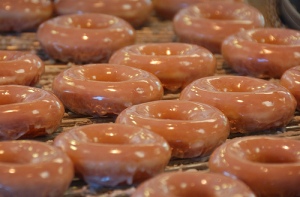 But that’s not the truth I want to talk about.  Instead, now that it has been officially confirmed that Krispy Kreme is opening a location in Auburn, I’m referencing a tweet I posted a month ago:

Doughnuts and journalists have a long and storied relationship.  An old-school joke asks, “What’s the hardest thing when a copy desk staffer dies? Prying the doughnut out of his cold dead hands.”

Journalistically speaking, the story was a fun experience, and it provided the basis for some fun lessons on how to source and when to tweet:

I originally caught wind of the Krispy Kreme story through a friend who told me how excited her husband was that we would be getting the purveyor of hot doughnuts.  She had heard the news from a family member, whom I also knew.

So I contacted the family member, and he (only clue you will get) confirmed that, indeed, Krispy Kreme was planning to locate in Auburn.  So I started from there.

Even though we are not dealing with the identity of CIA agents or U.S. policy in Iraq, I will not tell you who my source was.  He was not authorized to announce it, and while neither of us would have gotten thrown in jail, it is still information worth keeping confidential.

The worst thing any journalist can do is burn a source. First, it shows dishonesty toward the source.  Second, you are costing yourself good future sources.  Any source with worthwhile information is probably doing to do his/her homework on you, and can easily tell if you have revealed another source’s identity.

I had the information from one source, and it was a reliable source.  But I did not want to move too quickly, particularly on this topic.

In January 2014, someone set up a fake Instagram account and announced that Krispy Kreme would be coming to Auburn.  It got a lot of excited tweets, followed by some crestfallen follow-up tweets after the national office exposed the fake.

Krispy Kreme did send a retro bus with free donuts later that week.  I actually got a heads-up on that news from a friend at Auburn, via e-mail.  Even then, I was afraid to announce the bus’s visit via Twitter, and sent him a nervous e-mail to make sure it was true.

It was and the bus came — no, not freshly made, but I still ate a couple.  But KK fans in Auburn returned to yearning and trips to Columbus/Montgomery.

Thus, I had no interest in putting out a Krispy Kreme tweet that was not true.  I called around to some folks in the City of Auburn for confirmation, but could not get a second source to confirm.

Then, I saw some authentic paperwork related to the new site (again, no help on the source).  In my mind, that represented a second reliable, independent source.  I talked to a couple of journalism colleagues, and they liked the information too, as well as the prospects of those hot, fresh doughnuts.

Even so, for about three days, I held off on the tweet, mainly because of the previous reaction.  I called around to my city sources again, but no help.

Finally, by June 17, I had to decide to go with what I had.  To be honest, one big factor in my decision was that I had tired of the internal back-and-forth.  I just wanted to get it over with, and decided the information was good enough.

The point is: fear of getting it wrong is always the right response for a journalist.  We need to be as positive as possible before giving out the news.  To throw something out there and then shrug when it’s wrong — as often as it happens — is the wrong response.  We are only as credible as our information, and we should guard both zealously.

So, I clicked on “Tweet” for the above. It got great response, as I expected, along with pleas that I not mess with folks’ hearts.  I assured them that I would never tweet the info if I did not feel it was solid. Still …

What If It’s Not True?

I will admit that I spent a nervous couple of days, fearing a denial by the Krispy Kreme main office.  The longer I waited, the better I felt.

But another doubt emerged: What if Krispy Kreme pulled the plans on the new site? Or what if all of the redevelopment near Auburn Mall took so long that it delayed our doughnuts?

As I checked various sources online and on social media, I came to a nervous discovery: The Krispy Kreme corporate account was following me.  It was not a recent follow after the news; they started following me during the January 2014 debacle.

So that made me feel better, because they had known about it pretty quickly and had said nothing.  It also made me wonder: If I had remembered that before the tweet, would I still have done it?  I don’t have to worry about the answer to that question, but I am glad I didn’t remember.

But, of course, the Facebook post by Elizabeth White of WTVM in Columbus confirmed everything, and I allowed myself a little bit of gloating to hide my relief.

So now, I guess there is nothing to do but let the construction process take its time, and then join the rush.

I will see you there, and we can raise a hot glazed or a chocolate-frosted to a fun story with a happy ending.