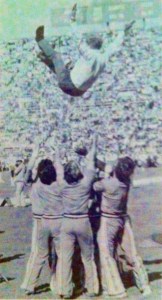 Auburn folks believe in honoring the legacy of Dean of Students James Foy, if response to my blog post on the topic is any indication. Both readership and comments reflected respect and affection for the Auburn icon.

With that in mind, I wanted to do more than complain (as much as that seems to be the SOP for someone my age). So here are some ideas on how the Foy Sportsmanship Trophy ceremony–and other things on campus–can reflect the man who served for 28 years as an advocate for students on campus.

1/Put ODK, not SGA, in charge. The two schools’ SGA leadership inserted themselves into the event after it was started by Omicron Delta Kappa, the senior leadership honorary that was so important to Dean Foy during his years at Auburn.

Not surprisingly, this also coincided with the addition of president speeches and the singing of the fight song, and the degeneration of the event into a rude boo-fest.

Glenn Richey, a faculty member in the Harbert College of Business, witnessed it firsthand when he served as ODK faculty secretary at Alabama. “I remember being on the court with Dean Foy and enduring a group of fans in Coleman Coliseum booing heavily during the trophy presentation,” he told me in an email exchange.

Auburn fans responded the same way in the most recent “ceremony,” even with a Foy family member present.

Returning it to ODK leadership would be the first step in restoring the ceremony’s original focus–honoring a man who graduated at Alabama, led Auburn’s student affairs office for nearly three decades and sought to keep the rivalry from, well, what it has become.

2/A film tribute to Dean Foy. Rather than speeches and a fight song, use the time for a film tribute. As with many Auburn traditions, my guess is that the students don’t know who Dean Foy is and what he stood for, and the SGA president speeches have done little to inform them.

When Auburn honors a former athlete, they often do so with a brief film that incorporates highlights of the athlete’s career.  Certainly a similar informative film could be produced to let viewers know about what Dean Foy means to Auburn.

That would also set an appropriate tone for such an observance, compared to the current conduct at the ceremony.  “It became an big enough issue that the Alabama Athletic Department and Coach Saban became very unhappy as they considered it poor sportsmanship to put the Auburn students on the spot,” Richey said. “They even suggested the event be moved to A-Day or the team not attending the event at all.”

To avoid that happening, Richey said, the two SGAs compromised, and the “tradition” of the other SGA president leading the singing of the fight song was eliminated. So while Auburn’s SGA president handled the singing correctly, it symbolized a program that has spiraled far from its original intent.

A simple ceremony, with a touch of school spirit but centering on an individual’s legacy at rival schools.

And since we’re on the subject, let me add one final talking point:

4/Once and for all, can we name the Student Center for Dean Foy? That requires too many sub-points to explain here, but it’s always worth mentioning.

I have seen several oral histories of the Kick 6, so I thought I would quickly jot down my memories of that night.  Add your own as comments, if you’d like.

I was at the top of Section 44 with a friend, Christie, who was at her first Auburn football game ever.  We had seen Sammie Coates catch the pop-pass and run it in, and we had booed with indignation when the officials restored one second to the clock.

I watched the attempted field goal, and from the North end zone stands, I had no idea that Chris Davis was back there.  Then I realized that he had caught the ball and started running it out.

My first thought was, “How quaint.  This player thinks he actually can do something fielding the field goal, and he is running fast too.”  I honestly thought he would be tackled and we would head to overtime.

Davis cut to the sideline, along with everyone else on the field, and when Cody Mandell and Dee Ford crossed in front of Davis, it was like a curtain opening and revealing Davis running toward the end zone with only Auburn players close.

As that curtain opened, it unleashed a roar as a huge wave cascading from all over Jordan-Hare, as I had never heard before, and suddenly we were all going crazy — cheering, hugging, screaming.

Our side of the stadium was not allowed on the field, so we got gridlocked in the stands for a while.  Like Mike Szvetitz quoted in the Opelika-Auburn News, I could not believe that they played “Celebration.”  A 1980 song?  Really?

For the next couple of days, I heard from relatives who did not even care about football (or so I thought) telling me they had seen the kick and they thought it was great.  My favorite was a phone message from my Uncle Mario, age 93, who would pass away the following summer.

I realized this was a moment shared not only with the college football world, but also sports fans across the country, a once-in-a-lifetime play.  Those of us who were there became fortunate witnesses to history, and were privileged to share in it.

I still get choked up seeing Auburn fans who were watching at home or in a restaurant or bar, realizing that the moment was theirs as much as ours in the stadium.

The next couple of weeks, Auburn was like Disneyland, the happiest place on Earth.  I remember seeing a campus tour pass in front of Tichenor Hall that next week, and everyone was gazing around them in wonder.  All that was needed was cartoon birds carrying “Welcome to Auburn!” banners and tour guides dressed as Snow White.

I realize we are mocked, often from another side of the state, for continuing to celebrate this moment.  But that’s what sport is about: the opportunity to share in such moments, and know that we were there, and that it really did happen.